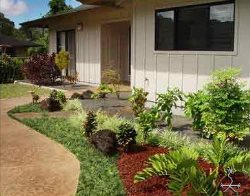 The Hanalei, upscale beach house by the bay

The Hawaiians were farming taro in their irrigated lohi (depressed patches) in all the valleys along the North Shore including the Hanalei Valley long before Captain Cook set foot on Kaua’i in 1778. They lived by gathering, agriculture, fishing and honoring their gods. Trails connected their valley communities which were centered around the life-giving water of the rivers which ran through them. They were proceeded according to legend by the Menehune like elsewhere on Kaua’i.

In 1853, an intrepid Scot by the name of Robert Crichton Wyllie acquired the land on the bluff to the East of the Hanalei River to start a sugar plantation to feed the European taste for the sweet crystals. He named the plantation Princeville after Hawaiian Prince Albert Edward Kauileaouli, the son of Queen Emma & King Kamehameha who visited Wyllie. Alas, the Prince died in 1862 at the age of only four. Thirty some odd years later, son of the Wilcox missionary family, Albert S. Wilcox, bought the plantation and the emphasis on sugar shifted to ranching which had begun on Kaua’i when the Europeans began moving here and bringing their animals.

The young Prince & this chapter in history of the area is remembered to this day in the place names of Princeville such as Albert Road, Queen’s bath & Wyllie Road.

Fast forward to 1978, the year I moved here with my surfer ex-husband who hailed from Portugese plantation workers from Oahu. The Princeville shopping center was still quite new. There was a small butcher shop, a restaurant, a store, a dress shop and a big real estate office and a couple of construction containers. The golf course was open, most of the roads were in. There were a smattering of houses and few condo projects finished. I worked in the restaurant, Chuck’s Steak House, and briefly lived in the newly finished condo project we called the pole houses with a bunch of geckos, surfers & a chef.

There was no hotel on the point where the St. Regis is. It was where many of us parked to walk down the trail to Hanalei. That gorgeous spot overlooking the North Shore and Hanalei Bay was our sunset spot. Club Med, which used to be The Hanalei Plantation featured in the classic movie South Pacific, was still open on the side of the hill overlooking Hanalei river mouth. On the beach just below Princeville on the bay, the surfers paddled out the back door channel to the Hanalei break. The Euros of Club Med were sunning themselves in the liquid sunshine. Coming from California where surf trunks were de rigor, the surfers were agog at the g-string bathing attire of the European men staying at Club Med. For some reason, the topless women were much more readily accepted by the surfer community. I would swim across the Hanalei River to get my mail from the post office in Hanalei and walk back up the hill to the condo. The North Shore was still a wild frontier back then. Hawaiian music filled the air at Black Pot on most days and the smells of families cooking for a camp out usually graced my nose.

Princeville back then was mostly beautiful views in every direction, a vision of the future outlined by roads, surrounded by pastures of gently rolling hills with cows, and green everywhere between the blue of the ocean and the waterfalls of the mountains. Princeville today has grown into the resort community once only imagined on the ranchland of a missionary descendant. Now there are many houses and condos, golf courses, hotels and restaurants all with beautiful views, graced with the surrounding beautiful beaches.

It is still "a setting of marvelous beauty and calm" as Robert Crichton Wyllie described it over 150 years ago.

Jump to a Rental